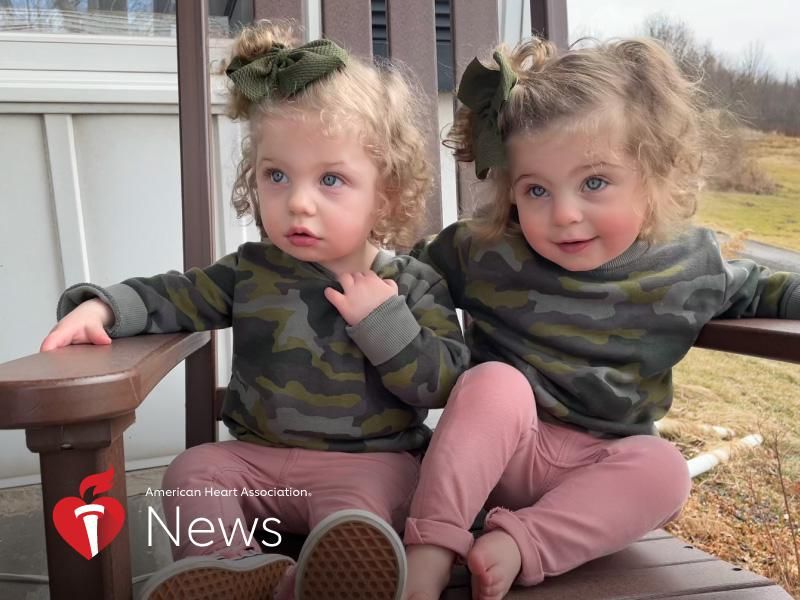 AHA News: Couple Had to Wait Until After Daughter's Birth to Learn Exactly What Was Wrong With Her Heart

At their babies' 20-week ultrasound, Bridget and Jerrid Conway were eager to catch another glimpse of their twin girls. In the exam room, the technician moved the wand over Bridget's stomach. When she lingered over Twin A, or Sadie as they later named her, the Conways suspected something might be wrong.

Their doctor said the right side of her heart looked larger than the left.

He ruled out hypoplastic left heart syndrome, a severe congenital heart defect in which the left side of the heart doesn't develop correctly. But he couldn't tell what was wrong. He said they'd know more after the babies were born.

"The toughest part was the unknown of the diagnosis," Jerrid said.

At around the same time, Bridget, who was 34, was furloughed from her job as a recruitment coordinator because of the pandemic. It was both a curse and a blessing, because it was hard to focus on work.

"We were in fear for the rest of my pregnancy," she said. "I was trying my hardest not to break down and cry, but I had many of those days leading up to their birth."

At home in Greenfield Township, Pennsylvania, Bridget focused on preparing the babies' room, gardening and caring for the four ducklings Jerrid got her as a gift. Six weeks before her due date, Bridget was at home getting ready for a doctor's appointment when her water broke.

Jerrid was working several hours away. They didn't know if he'd make it back in time. Her mother went with her to the hospital and they waited for Jerrid.

Sadie was positioned head down, ready for birth. But her sister, Skylar, was head up. Bridget needed a cesarean section. Jerrid arrived in time to join her in the operating room.

"As soon as I heard the cries, I was just elated they were alive and well and in our arms," Bridget said.

Weighing just over 3 pounds and 4 pounds, the sisters were rushed to the neonatal intensive care unit. Bridget, still in her hospital bed, was wheeled into the NICU to hold them. Jerrid spent the night watching the girls in their individual incubators.

A pediatric cardiologist examined the babies and did ultrasounds of their hearts. Skylar's was healthy. As feared, Sadie's was not.

She had a rare heart defect called double outlet right ventricle (DORV). This is marked by two issues. First, instead of her aorta connecting to the left ventricle, it went into the right. Second, she had a hole in the tissue wall separating the right and left ventricles; this is called a ventricular septal defect. She also had a small hole between the two upper chambers of her heart. That day, doctors delivered the news that Sadie would ultimately need surgery to repair her heart.

Both girls developed so well that they were able to go home 27 days after birth. As the Conways packed their belongings, nurses brought sobering instructions for the new parents. "They told me the scariest thing any mom could hear: 'We're sending you home and you have to watch to see if your baby goes into heart failure.'"

Once home, without the comfort of professionals monitoring Sadie, the Conways paid especially close attention to her. They watched the color of her skin, kept a daily log of her weight and monitored her feedings and breathing.

Four weeks after leaving the hospital, Bridget noticed Sadie's weight had dropped and she seemed lethargic. Bridget texted their doctor, who FaceTimed her right away.

"We were both in our robes," Bridget said, "and she said, 'Please put the camera on Sadie. I want to watch her breathe.'" The two watched silently for a full minute.

The doctor told the Conways to pack their bags. The following day, they took Sadie to the hospital two hours away. She had open-heart surgery a week later. Because of the pandemic, Bridget had to leave Skylar at home with her mother.

The operation closed the holes in her heart. Doctors did not address the misplaced aorta, saying that her heart will function fine that way.

The family spent 17 days in the hospital. Bridget drove home partway through to deliver more breast milk for Skylar. Sadie left the hospital on a feeding tube. Most babies her age would be doing tummy time. Sadie had to wait.

Yet when the twins turned 6 months old, Bridget considered it "my sweet spot for being a new mom." Both girls were active, giggling and sitting in their high chairs sampling solid foods.

Now, at 20 months, Sadie loves jumping on the family's trampoline and cuddling her cat, Bear. She sees her cardiologist twice a year. At their March appointment, the doctor said Sadie needs another open-heart surgery to shave down scar tissue that's blocking blood flow. The operation likely will be this summer.

Through it all, their family, their doctors and hope have helped the Conways persevere. They've also found connections through the American Heart Association. They participated in a virtual Heart Walk last year and look forward to this year's event.

They're also living life to its fullest. Last summer, the family took a three-week RV camping trip to South Dakota. This year, they'll take Sadie and Skylar to Disney World.

"You have to hold on to hope and just enjoy every moment that you have," Bridget said.