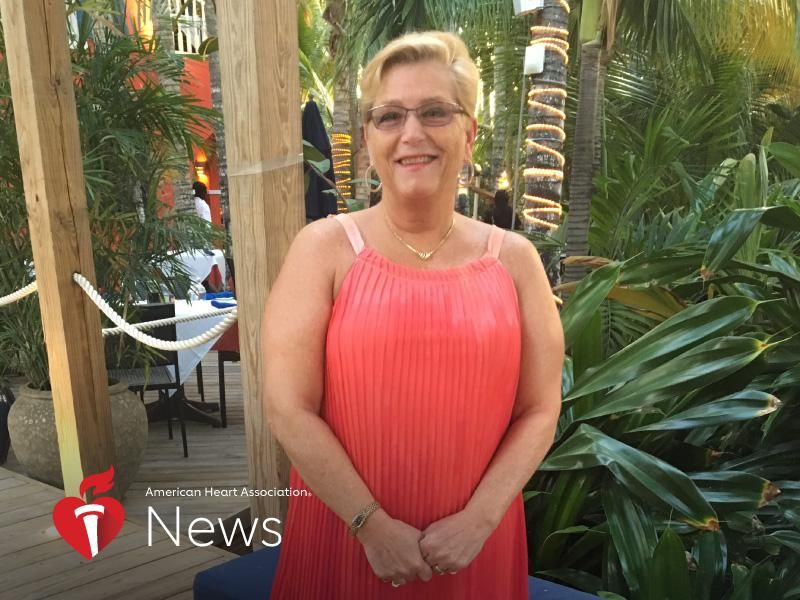 AHA News: She Was a Prime Candidate for a Heart Attack, If Only She'd Realized It

Just a few days after Dottie Lewis and her husband, Wayne, returned from vacation to their home in Plymouth, Massachusetts, she started feeling poorly.

This was 2019, a year before COVID-19 shut down travel and before face masks on planes. Dottie often caught a bug while flying. She figured it had happened again.

Dottie was looking forward to feeling better so she could rejoin her group of fitness friends. They met four times a week to exercise. Dottie also did yoga, Pilates and water aerobics. At 61, she was one of the younger people in her group.

She admits that at 5-foot-6 and 180 pounds, she needed to lose weight. But couldn't everyone, she thought?

After a few days with a sinus infection and what felt like a migraine, Dottie called her doctor. There was no availability, so Wayne took her to urgent care. She received migraine medication and antibiotics.

Later in the afternoon, feeling tired, she sat to check email and play an online game.

"Wayne, come here! I can feel my heart jumping out of my chest!"

Later, Dottie felt flushed. Sweat soaked her clothes and dripped off her forehead.

They used Wayne's blood pressure monitor on her. The cuff inflated but didn't register.

Wayne tried it on himself. It worked fine.

"We need to go back to urgent care," she said.

At urgent care, her heart rate reached dangerously high levels. Dottie was transferred by ambulance to a hospital.

During the ride, she heard a medic mention "heart attack."

That's impossible, she thought. She felt no pain, no pressure on her chest.

At the hospital, a doctor confirmed the diagnosis.

"What are you talking about?" Dottie said. "I'm not in pain. My cholesterol is normal. I exercise."

"What about your family history?" the doctor asked.

Dottie had a lot to say.

One sister had a heart attack at 33. Thirty years later, she needed a bypass. Another sister was diagnosed with a slight leak in her aortic valve. Her parents had also had heart issues. She figured she was different because her parents had been older, and her sisters were considerably overweight and didn't exercise. Except for her weight, Dottie considered herself to be in great shape -- and, thus, exempt from being a candidate for a heart attack.

After talking to the doctor, Dottie realized how wrong she'd been. A heart problem should've been her first thought.

While Dottie spent two days recovering in the hospital, doctors discovered a slight leak in her aortic valve. A week after she was sent home, her cardiologist ordered a cardiac catheterization, a procedure that provides a better look at the inside of the heart.

Dottie was looking forward to it because she assumed they would find no other problems.

"See this here?" said the doctor, pointing toward the screen. "This is a blockage. And here's another one."

Dottie stared at him in disbelief.

"You're not going home," he said. "We have to do open-heart surgery tomorrow."

Dottie had five blockages on her left anterior descending artery, another on the side of her heart and a cluster of three more at the top. Bypass surgery could repair them all.

After surgery, Dottie woke up to a jumble of tubes connected to machines. Large bandages covered her chest. An incision ran from her left wrist to nearly her elbow. A pacemaker sat on her stomach.

Although the sights unnerved her, she thought, "Wow, I made it. I'm here."

Three days later, she was sent home. Dottie slowly started walking and moving about, relying on Wayne to cook, clean and help her shower.

COVID-19 upended her fitness regime. Dottie then broke her wrist and later had a knee injury.

In the spring of 2021, she wanted to jump-start her fitness. She joined a gym that focuses on wellness and nutrition. Since then, she's lost more than 30 pounds and gained muscle mass.

Earlier this year, she saw her daughter, Katie Loud, in person for the first time in 18 months. Loud was impressed by her mom's stamina.

"We were on the go all week, playing with the kids," said Loud, who lives in Austin, Texas, and has two children. "She kept right up with me. That was awesome."

Although Loud always thought of her mother as active, she feared diet and family history might one day catch up to Dottie. Those fears prompted Loud to lose weight and get fit herself.

"I was determined to be healthier and stay that way," said Loud, who for a time worked as a spin instructor.

Dottie, now 64, talks to as many people as possible about family history and heart health.