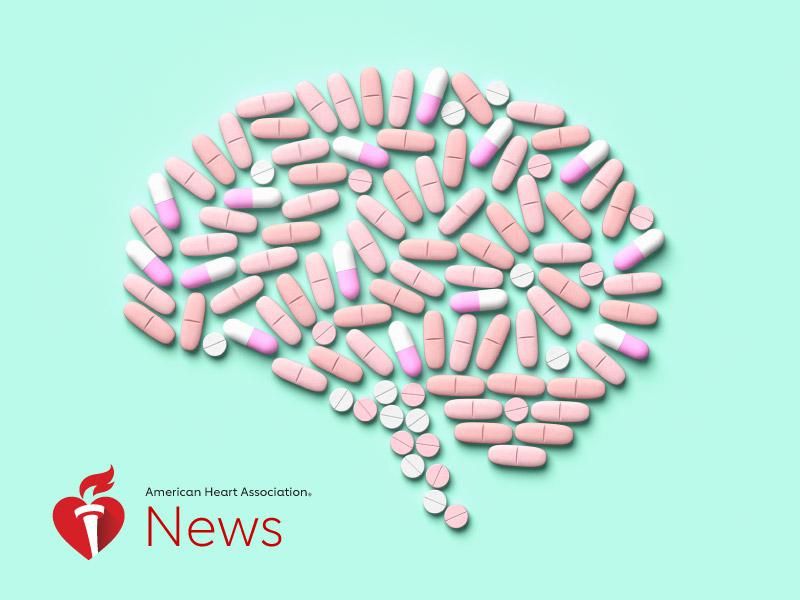 Certain types of antidepressants might be better than others for treating PTSD because they carry a lower risk of stroke, according to a new study.

The research, published Thursday in the American Heart Association journal Stroke, looked at data from 1.1 million U.S. veterans. It's the largest-ever investigation of post-traumatic stress disorder and antidepressant-associated stroke risk in young adults, according to the study authors.

Past research shows young adults with PTSD may be more likely to have a major stroke or a transient ischemic attack, called a TIA, by middle age. Even though strokes are often considered an older person's disease, for adults younger than 45, nearly half of all strokes are hemorrhagic, which occur when a weakened blood vessel ruptures and bleeds into the brain.

"Unfortunately, stroke cases among young adults are on the rise," said lead author Allison Gaffey. "Traditional risk factors for stroke, such as hypertension or high blood pressure, may relate to some of the increase, but it is also important to examine if other underappreciated factors could uniquely impact young adults."

The study looked at 13 years of data from young and middle-aged veterans who served in the most recent wars in Iraq and Afghanistan. Researchers then zeroed in on the stroke risks, independently and combined, among participants who had PTSD and those who took two types of medications commonly used to treat PTSD -- selective serotonin reuptake inhibitors, or SSRIs, and serotonin and norepinephrine reuptake inhibitors, or SNRIs.

The results showed taking SSRI medication carried a 45% greater risk of hemorrhagic stroke. A strong association wasn't shown between stroke risk and using SNRI medication or for those who had a diagnosis of PTSD, independent of taking medicine for it.

"These results suggest that SSRI use may be a potent risk factor for developing hemorrhagic stroke at young ages," said Gaffey, a clinical psychologist and postdoctoral associate in cardiovascular medicine at Yale School of Medicine in New Haven, Connecticut.

"We know that people with a history of trauma may be more likely to engage in unhealthy lifestyle behaviors, such as smoking, or have other traditional risk factors for stroke, such as obesity. Even when we account for these risk factors and frequency of visits to a health care provider, use of SSRIs remains a primary predictor of hemorrhagic stroke in young people."

Although the study couldn't answer why SSRIs might increase stroke risk, Gaffey said possible causes could be that the medication can reduce the ability of platelets to clot, can decrease platelet count, and has been associated with bleeding in the stomach. Platelets are specialized disk-shaped cells in the bloodstream and are involved in the formation of blood clots, which play an important role in heart attacks, strokes and peripheral vascular disease.

"Health care providers might consider prescribing other classes of antidepressants, such as SNRIs, or other treatments, such as cognitive behavior therapies, among younger patients who have other risk factors for hemorrhage," Gaffey said. "These (cognitive behavioral) therapies offer excellent but comparatively underused tools for the integrated treatment of PTSD, other mental health conditions, and behavioral risk factors for stroke."

Overall, clinicians should adopt a personalized, tailored approach for discussing and managing individual risk of stroke with younger patients, she said. Gaffey also called for more in-depth studies that look at stroke risk and SSRI use among non-veterans, including older adults and women. Most of the veterans in the new study were men.

Laura Kubzansky, who was not involved in the research, said the study adds a new layer of understanding to an important issue. "Its findings provide some additional clues as to whether and when apparent effects of PTSD on cardiovascular endpoints may be driven by medication."

But she said the research was limited because it was observational and didn't prove a cause-and-effect between SSRIs and stroke.

"Because medications are typically provided when psychological distress is most severe, the findings could suggest either the severe psychological distress is the primary driving factor or that the drug itself is the causal factor. Or both could be true," said Kubzansky, professor of social and behavioral sciences at Harvard University's T.H. Chan School of Public Health in Cambridge, Massachusetts. "It's a persistent and particularly challenging question."