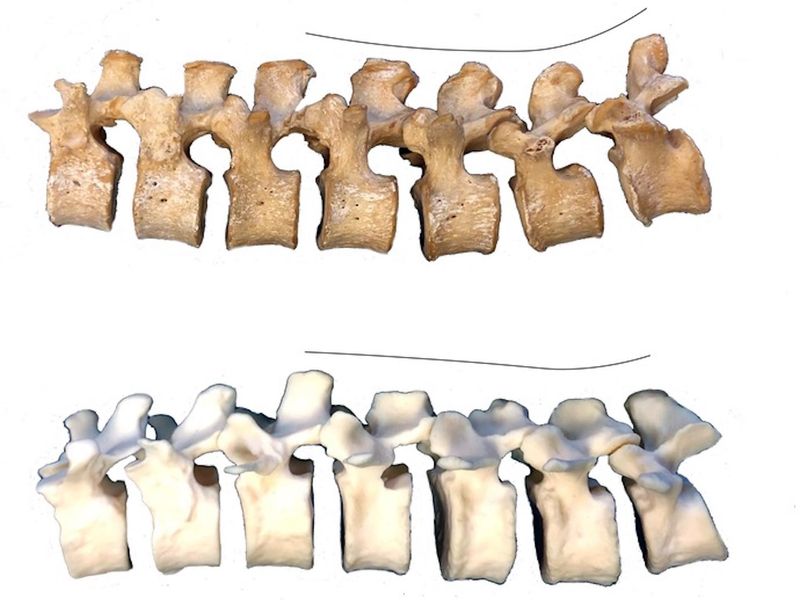 Looking to Neanderthals to Explain Today's Lower Back Pain

Anthropologists focused on the spine's curvature, which is partly influenced by wedging, or angling, of vertebrae and the softer discs between vertebrae.

"Neanderthals are not distinct from modern humans in lumbar wedging and therefore likely possessed curved lower backs like we do," said Scott Williams, an associate professor in the anthropology department at New York University.

"However, over time, specifically after the onset of industrialization in the late 19th century, we see increased wedging in the lower back bones of today's humans — a change that may relate to higher instances of back pain, and other afflictions, in post-industrial societies," he continued in a university news release.

The spine is key to the body's support system. For the study, Williams and colleagues examined the spines of more than 300 pre-industrial and post-industrial modern humans from around the world and compared them with Neanderthal spines.

It was notable that within spine samples from people in the same eras, there were no differences associated with where people lived, according to the authors of the study.

"Past research has shown that higher rates of low back pain are associated with urban areas and especially in 'enclosed workshop' settings where employees maintain tedious and painful work postures, such as constantly sitting on stools in a forward-leaning position," Williams noted.

The differences between the spines of pre-industrial and post-industrial people offer new insights into back problems that afflict many people, according to the researchers.

"Diminished physical activity levels, bad posture, and the use of furniture, among other changes in lifestyle that accompanied industrialization, resulted, over time, in inadequate soft tissue structures" to support lower back curvature, Williams said.

"To compensate, our lower-back bones have taken on more wedging than our pre-industrial and Neanderthal predecessors, potentially contributing to the frequency of lower back pain we find in post-industrial societies," he explained.

The results appear in the March issue of the journal PNAS Nexus.

There's more on low back pain at the American Academy of Family Physicians.