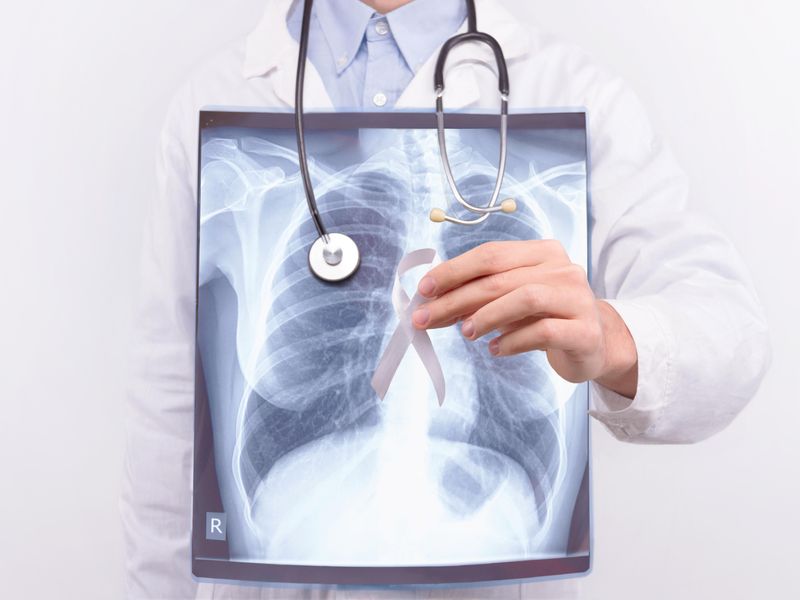 Lifelong smoker Mike James had quit the habit for nearly three years when, through fluky circumstances, he found out that he had a small tumor in his right lung.

But James now has a new lease on life, thanks to a groundbreaking clinical trial that combined immunotherapy with chemotherapy to shrink lung cancers before removing them surgically.

The combination therapy reduced the risk of recurrence, progression or death by 37% compared to patients who received chemo alone, according to findings published April 11 in the New England Journal of Medicine.

Further, the combo completely killed all cancer cells in 24% of the patients who received it versus 2% of the chemo-only patients, said clinical trial researcher Dr. Mark Awad, a medical oncologist at Dana-Farber Cancer Institute in Boston.

"They all had surgery and the specimen that was removed, when it was examined under the microscope, we just saw scar tissue or fibrosis with no viable cancer cells," Awad said.

Awad presented results of the clinical trial Monday at a meeting of the American Association for Cancer Research, in New Orleans.

The immunotherapy used in this study was nivolumab (Opdivo), a PD-1 checkpoint inhibitor already approved to treat more advanced forms of lung cancer.

Based on findings of this clinical trial, the U.S. Food and Drug Administration has approved nivolumab for this specific use in patients with operable lung cancer tumors, drugmaker Bristol Meyers Squibb said in a news release. The pharmaceutical company funded this research.

In the study, researchers tested whether adding nivolumab to standard chemotherapy could more effectively shrink tumors prior to surgery, and also reduce the risk of cancer returning.

About 20% to 25% of patients diagnosed with non-small-cell lung cancer have a tumor that can be surgically removed, the researchers said in background notes.

But as many as 55% of lung cancer patients who have their tumors removed suffer from a recurrence of their cancer and eventually die from it.

Nivolumab works by blocking a process by which cancer cells avoid detection by the immune system, Awad said.

Drugs like nivolumab and similar drugs take the brakes off the immune system, trying to get it to recognize and fight off the cancer, he said.

James, who had smoked since his teenage years, found out he had lung cancer in August 2019 while at the hospital for another reason.

He had been experiencing episodes of lightheadedness, and had gone in for a stress test.

He was walking past the hospital's ambulatory X-ray department when he recalled that his primary care doctor had urged him to get a chest X-ray when he got the chance, given his smoking history.

"He said, 'Whenever you're in the hospital, just go in. There's a request in for an X-ray.' So I just had it done," James said. "The outcome of that was they found something on that X-ray."

Specifically, they found a small tumor in the upper lobe of James' right lung.

James became one of 179 patients randomly assigned to receive the combination nivolumab/chemotherapy treatment prior to surgery. An equal number were randomly selected to receive chemo alone.

All of the patients had tumors that could be removed surgically, and had a cancer diagnosis between stage 1B and 3A.

Patients who received the combo therapy before surgery have had an average event-free survival rate of 31.6 months, compared to 20.8 months for patients treated with chemo alone.

The combo therapy not only did a better job killing cancer cells, but did so without significantly increasing side effects, Awad said.

"Importantly, when using these therapies before surgery, it didn't appear that it led to any delays or increase in cancellation of surgeries due to side effects," Awad said. "In fact, it seemed like more patients were actually able to get to surgery to have their lung cancer successfully removed with more minimal types of procedures than the control group, which is patients that only got the chemotherapy without the immunotherapy."

Cancer doctors now need to figure out whether they can predict which cancers will respond better to treatment with an immunotherapy like nivolumab, Kamal said.

James started his combination therapy in September 2019, and went through three rounds. During chemo, he wound up gaining back some of the weight he'd lost from anxiety right after his diagnosis.

In December 2019, doctors removed the upper lobe of his right lung to cut out the tumor.

Regular CT scans have shown no recurrence of his cancer, and the lingering side effects from his combination therapy have subsided, James said.

"Other than having a little difficulty breathing when I'm a little overexerted, everything's fine," he said.

James remains bewildered a bit by his cancer experience, partly because the COVID-19 pandemic followed on its heels.

"It was a short period of my life, and the pandemic started right after I returned to work from the lobectomy, so it's all kind of meshed into one big, glorious kind of catastrophe that's happened to go on for three years," he said.

The American Cancer Society has more on immunotherapy.