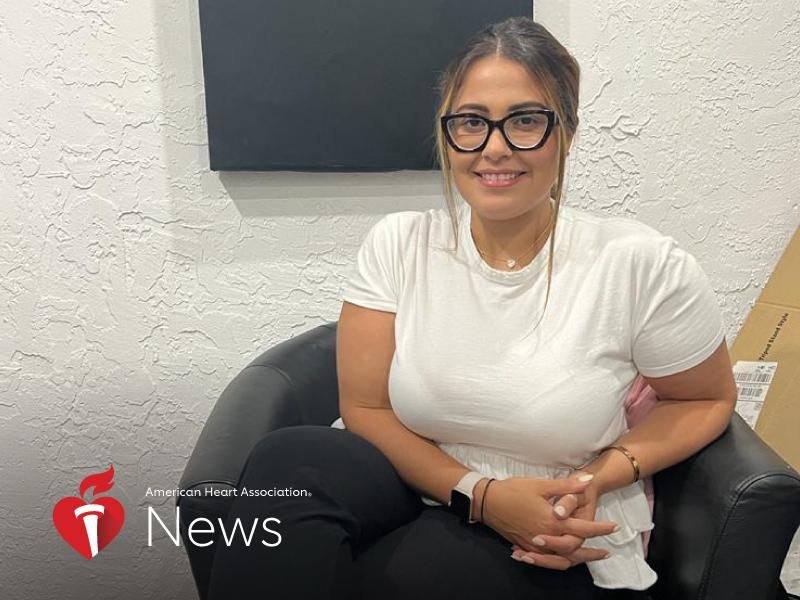 AHA News: 8 Days After Giving Birth, 29-Year-Old Had a Stroke

Noelia Gutierrez appreciated her mother traveling from New York to Florida to help with the arrival of her third child. One day, Gutierrez decided to have a fun lunch: She would introduce her mom to sushi. And her brother, a flight attendant who was on the road, would witness the occasion via video chat.

Holding her 8-day-old daughter against her chest, Gutierrez was eating at her kitchen counter when a bizarre fire-hot sensation bore into her head.

"Mom, I'm having a headache and it doesn't feel normal," she said.

Then her right side started to tingle.

Gutierrez, a nurse practitioner, handed the baby to her mother and called 911.

Then Gutierrez started to shake.

Paramedics determined the 29-year-old was having a stroke. As they transported her from her home in Miramar to a hospital with a stroke treatment center, the staff there prepared for her arrival.

At the hospital, Gutierrez's health was rapidly declining. Her arms and legs were going weak.

Doctors needed to know what type of stroke she was having and where it was located. Imaging found a clot blocking the arteries supplying blood to her brain stem.

The hospital was equipped with doctors and technology capable of performing a procedure to remove the clot. It's called a mechanical thrombectomy. As hoped, the removal of the clot opened the blockage, restoring blood flow to her brain.

Doctors believed the clot -- and, thus, the stroke -- was caused by two things: pregnancy and a previously undetected hole in Gutierrez's heart.

The hormonal changes brought on by pregnancy makes women more prone to clotting. Gutierrez also was found to have a patent foramen ovale, a small opening in the wall between the right and left upper chambers of the heart. PFOs are a common form of a congenital heart defect. She later underwent a procedure to have it closed.

The stroke occurred in March 2017. Gutierrez spent two weeks in the hospital, then two more weeks at an in-patient rehabilitation facility followed by two months of outpatient rehab.

By June, she was about 80% recovered.

Gutierrez relearned how to walk and eat. A fluent Spanish speaker, she initially lost her ability to access Spanish words. She could not communicate with her mother, who'd been visiting from New York and stayed to help and only speaks Spanish. Her husband, Chris, quit one of his two jobs to be at home more. He pushed her to keep moving and improving.

"After I got home, things actually got worse because I became very anxious," Gutierrez said. "If I had an appointment at 12, I'd want to be in the car by 7. I didn't want to be around my baby because she was throwing up. That's not like me."

Gutierrez and doctors said her behavior was a mix of post-stroke anxiety and postpartum depression.

Five years later, Gutierrez said her ability to retain information and multitask hasn't fully returned. Because of this, she changed from working directly with patients to nursing via telehealth.

But she's grateful for what she calls those relatively minor issues.

"It's like being lucky in an unlucky way," she said.

The luckiest aspect involved the timing of her stroke.

Thrombectomies were relatively new at the time. The hospital where she was treated had only recently established a program for emergency responders to recognize stroke signs and quickly transport patients to the most appropriate stroke treatment center.

"Had this happened even three years earlier, she would have likely been in a comatose condition and nursing home-bound," said Dr. Brijesh P. Mehta, her neurosurgeon. "Noelia's outcome is a nice example of what we can achieve through hospitals working to educate EMS and the community."

Additionally, due to the success of the emergency services training program, and success stories like Gutierrez, Mehta and his colleagues went on to create a coalition that standardized pre-hospital stroke protocols in the area.

Gutierrez has become an advocate for heart health and recognizing stroke symptoms, especially among Latinos.

"In the Hispanic community, it's really kind of taboo to speak about medical things," she said. "We were educated and raised to be hard workers, to get married and have a solid family. But not to speak about health and how it affects you. So that's why I think it's important to keep telling my story."