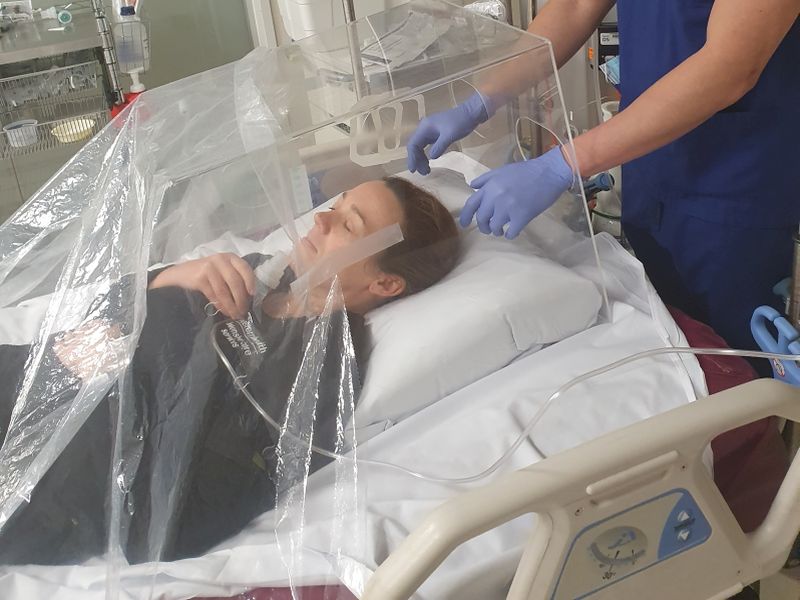 Intubation is done when patients are placed on a ventilator.

Aerosol boxes have been touted as a quick, simple way to protect workers, but their effectiveness and safety were never clinically tested. No international guideline on personal protective equipment has endorsed their use.

Even though experts have raised concern that the devices may put health care workers at risk, they are in use worldwide.

In this study, researchers tested the effectiveness of five aerosol containment methods (aerosol box; sealed box with and without suction; vertical drape; and horizontal drape) compared with no intervention.

Volunteers held a bottle of harmless fluid just under their mouth, and coughed every 30 seconds. Detection devices were used to count different-sized airborne particles and assess particle spread for five minutes.

Compared with using no containment device, exposure to airborne particles of all sizes was higher when an aerosol box was used, the study found.

If COVID-19 particles act the same way as the fluid used in this simulation, the results suggest the aerosol box increases exposure to virus particles -- in some cases by a factor of five times or more, according to findings published July 9 in the journal Anaesthesia.

The investigation was conducted by a team at Intensive Care and Anaesthesia Specialists at Eastern Health in Melbourne. Peter Chan and Joanna Simpson, who led the effort, said the research team was surprised by the findings.

"Spikes of airborne particles were clearly seen, coinciding with patient coughing. We believe that these represent particles escaping from the arm access holes in the aerosol box," the researchers reported.

The race to provide protective equipment has resulted in a variety of devices, but evidence of their safety and effectiveness has been lacking, the study authors said.

"This study demonstrates that devices such as the aerosol box we tested -- which is typical of designs used worldwide -- confer minimal to no benefit in containing aerosols during an aerosol-generating procedure and may increase rather than decrease airborne particle exposure," the authors concluded.

In a journal news release, Chan said if the aerosol box were sold as a product and regulated, it would probably need to be recalled immediately due to the potential infection risk for health care workers.

"Unfortunately, because these devices have been donated and are not regulated in any way, health care workers might be continuing to increase their exposure to COVID-19 while thinking they are protecting themselves," he added.

The U.S. Centers for Disease Control and Prevention has more on COVID-19.