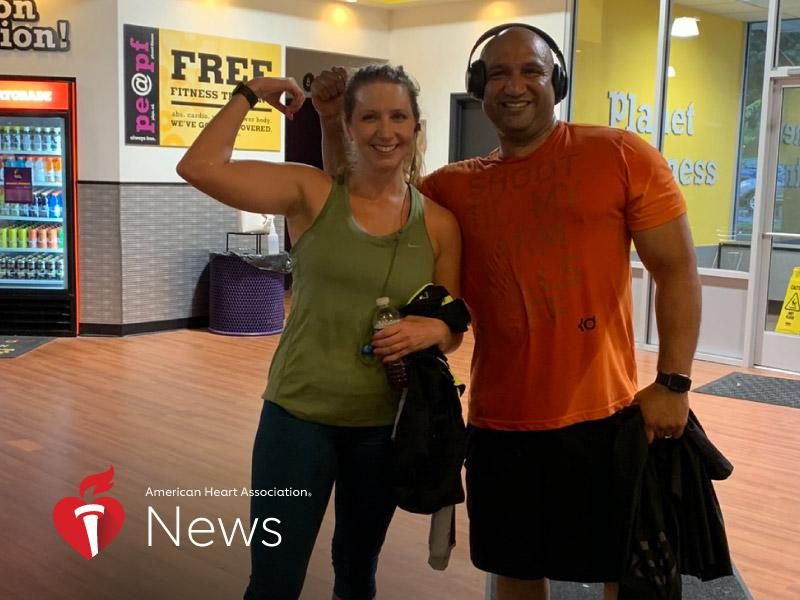 David Soares finished a set of weightlifting during an early morning workout at a friend's home gym in Albany, New York, when he found himself unable to catch his breath. He sat down but it didn't help, so he stretched out on the ground.

The day before, he'd taken a red-eye flight home from his honeymoon. So he figured he just needed a nap. His host, Michael Castellana, wasn't ready to dismiss the discomfort so easily.

"He wasn't really engaging, and if you know David, you know he never stops talking," Castellana said.

Noticing that Soares kept putting his hand on his chest, Castellana got his blood pressure cuff and insisted on testing him.

"It said 227/127, so I said some choice words, gave him a glass of water and an aspirin and told him we were taking him to the hospital," Castellana said.

Soares resisted, but Castellana -- who's been treated for high blood pressure for two decades and has a family history of heart disease -- wouldn't take no for an answer.

At the hospital, testing showed Soares, then 47 and in seemingly great shape, had experienced a heart attack. Doctors also determined he needed a quintuple bypass.

"It was a stunning wake-up call that required a complete and total change in philosophy and lifestyle," Soares said.

It also wasn't a complete surprise.

Soares' father underwent a quadruple bypass following a heart attack, then died from a second heart attack at 68. Years before this frightening episode, Soares had been diagnosed with high blood pressure and high cholesterol. He'd been prescribed medication but wasn't diligent about taking it. His four older siblings have also been treated for high blood pressure and cholesterol.

As the district attorney for New York's capital city, Soares maintained such a busy schedule that he didn't always keep up with health checkups.

While he admits to having prioritized work over health, he did work out up to five times a week. But juggling a demanding job and three teenagers, his family dinners often came from a drive-through. They ordered pizza at least once a week. It was his 12 weeks in cardiac rehabilitation that taught him how to have a heart-healthy diet. He counted calories before his heart attack but never paid attention to things like sodium, he said.

Doctors told Soares that getting regular physical activity helped him recover more quickly, but he couldn't out-exercise his family history.

"If you're genetically predisposed, there's no negotiating," he said. "In my case, I was brought back to the table to renegotiate and unfortunately that table was the surgery table."

In addition to the three months he spent physically recovering, Soares also grappled with depression. He became anxious in crowds, fearing that people might bump into his chest.

"You go from being a sort of captain of industry to being in a room where walking from point A to point B is laborious," he said.

When he returned to work, he made changes to lower his stress. He reorganized his team to better delegate responsibilities and committed to coming home on time each day and unplugging from work.

Now 51, Soares continues to work out with Castellana and a group of friends, and he remains vigilant with his diet. He's also more careful about the information he consumes.

"My doctor would talk to me about it at every appointment, but there is this fitness and nutrition culture out there telling you 1,000 times a day to hit the gym or eat this, and I was paying attention to that more than my own cardiologist," he said. "If I had listened to him, I may not have experienced this."