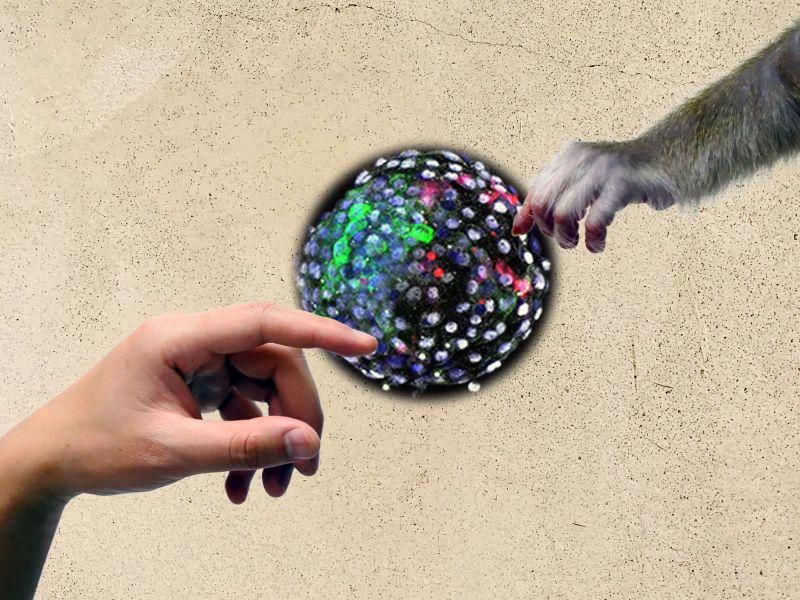 The human/monkey chimeras -- organisms that contain cells from two or more species -- survived for up to 20 days in petri dishes, a team of Chinese and U.S. researchers reported.

This sort of research raises ethical concerns that can make a person queasy, said Nita Farahany, founding director of the Duke Initiative for Science & Society in Durham, N.C. She is also co-author of an editorial accompanying the April 15 report in the journal Cell.

Thoughts of "Planet of the Apes" or the flying monkeys in the "Wizard of Oz" spring easily to mind.

"People still recognize there's a divide between humans and non-human primates, and when you start to introduce human cells into a non-human primate like a monkey, people start to think, what is it that you're creating?" Farahany said. "People imagine where that kind of research could go, if we're able to overcome a lot of scientific hurdles between here and here, and I think that's why people start to become uncomfortable."

But this study also paves the way for potentially lifesaving medical advances, said editorial co-author Henry Greely, director of the Stanford Center for Law and the Biosciences in California.

"The long-term goal of this research team is to grow human organs in pigs -- kidneys, livers, hearts, etc.," Greely said. "They want to do that to make more human organs for transplants. Tens of thousands of people die every year in the U.S. on a transplant list, waiting for a transplant."

Attempts to create human/pig chimeras have been only partially successful because 90 million years of evolutionary history separate the two species, researchers said. Successful human/monkey chimeras could provide clues that would allow scientists to make the leap to pigs or cattle.

Human/animal chimeras also could help fill in blanks in our understanding of early human development following conception, and improve the study of how viruses, bacteria, drugs and devices work in humans, Farahany and Greely said.

"The kind of animal models we have right now aren't sufficient to model most of the diseases that humans suffer from -- particularly brain diseases that humans suffer from, but really any disease," Farahany said. "That means when you're trying to test out a drug or you're trying to understand how a disease arises or develops, we don't have very good models to do that right now."

For example, such a human/animal chimera could help us better understand why the Zika virus causes birth defects in the children of infected pregnant women, Farahany said.

In 2017, members of this research team reported that they had incorporated human cells into early-stage pig tissue, but the contribution of human cells was fairly low.

So the researchers set out to create a chimera in a species more closely related to humans -- the monkey species macaque.

Six days after 132 monkey embryos were created in the lab, each was injected with 25 human stem cells.

After 10 days, 103 of the chimeric embryos were still developing. Survival soon began to decline and by day 19 only three chimeras were still alive.

Importantly, the percentage of human cells in the embryos remained high throughout the time they continued to grow, researchers said -- meaning that the human cells were integrating into the host monkey species.

The creation of such human/monkey chimeras "will allow us to gain better insight into whether there are evolutionarily imposed barriers to chimera generation and if there are any means by which we can overcome them," Izpisua Belmonte said in a journal news release.

Research along these lines also "may have relevance for understanding such processes as aging, which is the major risk factor for many human diseases [Alzheimer's, heart disease, cancer] but is not well understood on a cellular level," Izpisua Belmonte said.

There was no chance these embryos could have become a living being, Greely said. They weren't implanted into a uterus for gestation. And even if they were, differences in the human and monkey reproductive timeline likely would have doomed their chances for survival.

But such research automatically raises ethical concerns. And Greely said the research team did themselves no favors by not publicizing their work in advance.

"I wish they had talked more in advance about what they were doing," Greely said. "If people knew this research was on the way and why it was being done, then it wouldn't be a great shock when you wake up one day and you see a headline about hum-keys."

Part of the worry is that the monkey embryos were injected with human stem cells that weren't directed in any particular way, Farahany said.

"It was human cells introduced at such an early stage of development that human cells could integrate into every part of what might eventually become a born primate," Farahany said. "That's probably what's most complicated, the unknowns and uncertainties that creates. Could you have human cells in every part of it, and how human-like does that make whatever resulted from this?"

Greely said there are ethical questions to be debated about the treatment of the animals involved in these studies, as well as notification of a human donor that his or her cells are being used to create a chimera.

"As long as it just stays embryos in a dish, there are concerns but they're relatively minor. If you start getting born organisms, then I think the concerns get bigger," Greely said. "What are these things? How should we treat them?

Is it somehow degrading to humanity to have things walking around that have human cells in them?"

"I will note that several hundred thousand humans are alive because they've got animal cells in them -- people with pig and cattle heart valves," Greely added. "We've had people walking around with animal parts in them."

Stanford University has more about the ethics of creating human/non-human chimeras.