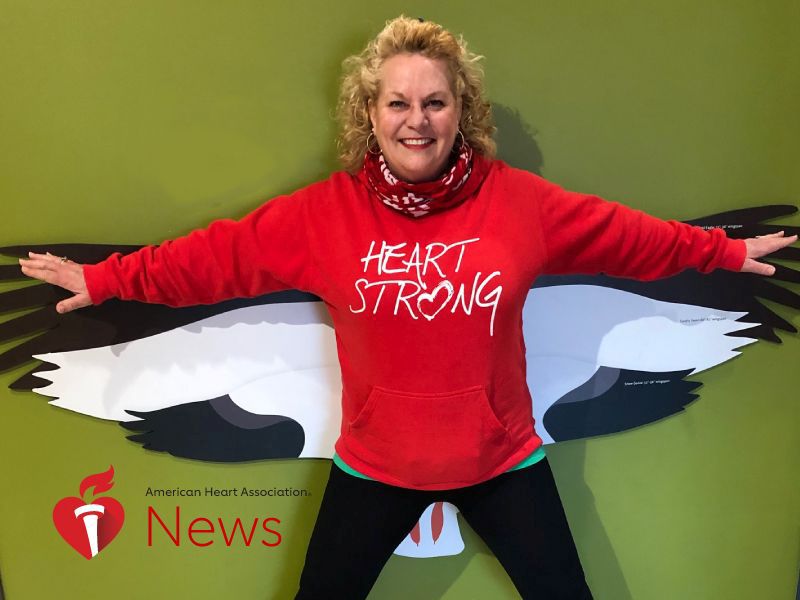 AHA News: She Put Off Heart Symptoms Until It Was Almost Too Late

When she's not biking, hiking or swimming, Bev Pohlit can probably be found tending to the vegetables growing in her quarter-acre backyard in Sinking Spring, Pennsylvania.

"I take advantage of every little square inch," she said. "My vegetables are my morning snacks."

But as Pohlit enjoyed this rather healthy lifestyle, she also had one vice: She smoked precisely seven cigarettes every day. Although she realized smoking could cause heart disease, it didn't seem to impact her health. Until it did.

Four years ago, Pohlit and her husband, Stan, went out for their first bike ride of the season. They had only gone a couple of miles when she needed to stop and catch her breath. Her heart was pounding, and she didn't feel well.

Chalking it up to winter inactivity, the couple postponed their ride.

Other symptoms followed. On a Mother's Day outing not long after, Pohlit experienced dizziness so intense "it felt like there was an earthquake," she said. Unwilling to spoil the day, she kept it to herself. About a month later, the then-55-year-old began to feel a persistent burning sensation in her chest. After nearly a week, Pohlit awoke in extreme pain.

"It felt like muriatic acid was burning me from the inside out," she said. "We should have called 911."

Instead, Stan raced her to the hospital. An electrocardiogram revealed she was having a heart attack caused by a 95% blockage in her right coronary artery. Cardiologist Dr. Michael Koslow inserted two stents to open the blockage, and she felt immediate relief.

"As long as she makes the necessary lifestyle changes, she can look forward to living a normal life from here on out," Koslow said.

"Cigarettes will kill you in so many ways, and I want to live," she said.

Pohlit learned she had a genetic predisposition to high cholesterol. She's allergic to statins, and other drugs barely made a difference, but an injectable medication brought her cholesterol down within a month.

While her physical symptoms subsided, Pohlit experienced depression, loneliness and even embarrassment in the weeks that followed. She downplayed it to her family.

When Pohlit told her brother and cousins about her heart attack, she made a joke of it, texting them a selfie from her hospital bed, her face covered with wires. "I'm fine, just a little wired up!" she joked.

Cardiac rehabilitation helped. She went for several weeks and found she enjoyed the endorphin rush.

"We ran toward each other and hugged so hard for so long," Pohlit said. "We finally felt that we weren't alone."

To spread awareness about heart disease in women, Pohlit and Hartline founded the support group Heart Sisters and speak at local hospitals.

Pohlit also writes a blog, From My Heart, and often talks with other female survivors by phone during her lunch breaks. On a recent hike, she stuffed her pockets with red dress pins and gave them to every woman she encountered.

"I want people to know what happened to me so it won't happen to them," Pohlit said. "Having a heart attack opened my eyes to not only a love of family and friends but a love of human beings and heart sisters. The bonds we have are so deep and unbreakable."