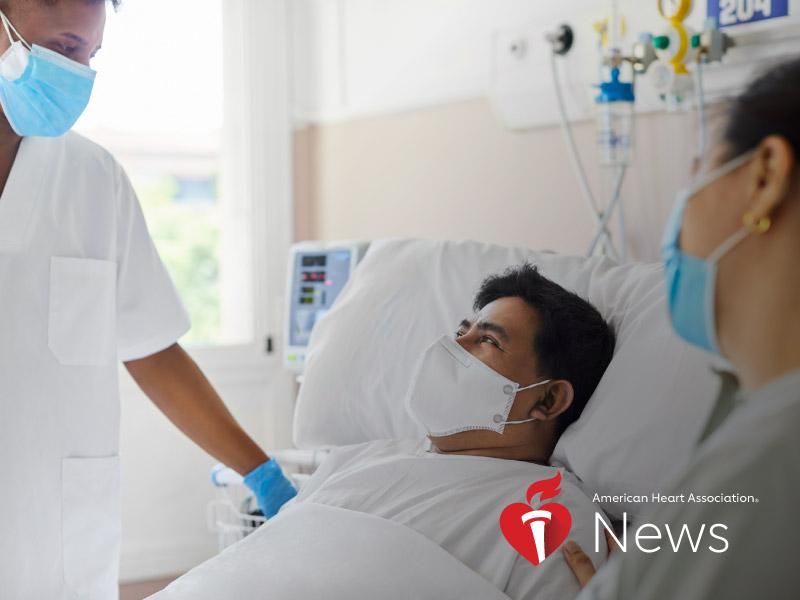 Stroke hospitalizations for younger adults -- along with the cardiovascular risk factors associated with them -- have risen since 2007, preliminary new research shows. But the chances of people under age 45 dying from a stroke in the hospital have dropped.

The increase in hospitalizations was higher for women and for white and Hispanic adults, according to the findings presented recently at the American Heart Association's Quality of Care and Outcomes Research Scientific Sessions in Reston, Virginia. The work is considered preliminary until the full findings are published in a peer-reviewed journal.

"The findings are both good and bad. Overall, it shows more young adults are seeking care and have more stroke awareness than 10 years ago," said the study's senior researcher Dr. Chintan Rupareliya, senior neurology resident in the department of neurology at the University of Kentucky Medical Center in Lexington and upcoming stroke fellow at UT Southwestern in Dallas. But the "persistent increase in comorbidities is alarming."

Stroke in young adults is much less common than it is in older adults, with only 10%-15% of all strokes occurring in people 18 to 50 years old. Prior research has documented a rise in strokes among younger adults as well as in traditional stroke risk factors more typically seen in older adults, such as high blood pressure and cholesterol levels, diabetes, tobacco use and obesity.

Previous studies suggest young women face a higher stroke risk than young men, which may be partially due to the increased risks associated with birth control pills and pregnancy. Combining estrogen-containing contraceptives with additional risk factors, such as smoking, high blood pressure and migraine with aura, increases a woman's stroke risk. If a woman takes estrogen, smokes and has migraine with aura, she faces a ninefold higher stroke risk compared to women without those risk factors, according to a 2020 article in the journal Stroke.

In the new study, researchers compared hospitalization records for two groups of adults, ages 18 to 44, in the National Inpatient Sample. They compared data for more than 10 million hospital stays in 2007 to about 8.5 million stays in 2017 to see how stroke hospitalization, risk factors and mortality rates had changed among younger adults.

Overall, the rate of stroke hospitalizations among younger adults was low, but it increased by nearly 50% from 2007 to 2017. The rise was especially high among women and for white and Hispanic adults. Stroke hospitalizations rose 78% for women compared to 58% for men. They climbed 77% for white adults and 70% for Hispanic adults, while increasing 56% for Black adults. The increase was smallest -- 29% -- for Asian and Pacific Islander adults.

Traditional stroke risk factors and related medical conditions also rose significantly over the decade. Obesity more than doubled, from 8.6% to 18.5%. The presence of high blood pressure and cholesterol levels, smoking and depression also rose, as did related illnesses such as heart failure and irregular heart rhythms.

But the odds of dying in the hospital after a stroke fell by 16% between 2007 and 2017. Although the study did not examine why stroke mortality rates fell, improvements in stroke treatments over the past decade probably are responsible, along with greater awareness of stroke symptoms and the need to immediately seek care, Rupareliya said.

"Time is brain when a stroke is occurring," he said.

Stroke symptoms include sudden numbness or weakness in the face, arms or legs, especially on one side of the body; sudden confusion, trouble speaking or difficulty understanding others; vision problems in one or both eyes; dizziness, trouble walking or lack of balance; and a sudden, severe headache.

Women may be becoming increasingly aware of the stroke risk factors they face and may be better at recognizing symptoms when they occur, said Dr. Shlee Song, a neurologist and co-director of the Comprehensive Stroke Center at Cedars-Sinai Medical Center in Los Angeles. She was not involved in the new research.

Song said further analysis by race and gender, such as determining whether women have different types of stroke than men, would be helpful. "Then you can target the risk factor profiles that contribute to that disease process. Different subgroups may need more targeted therapies."