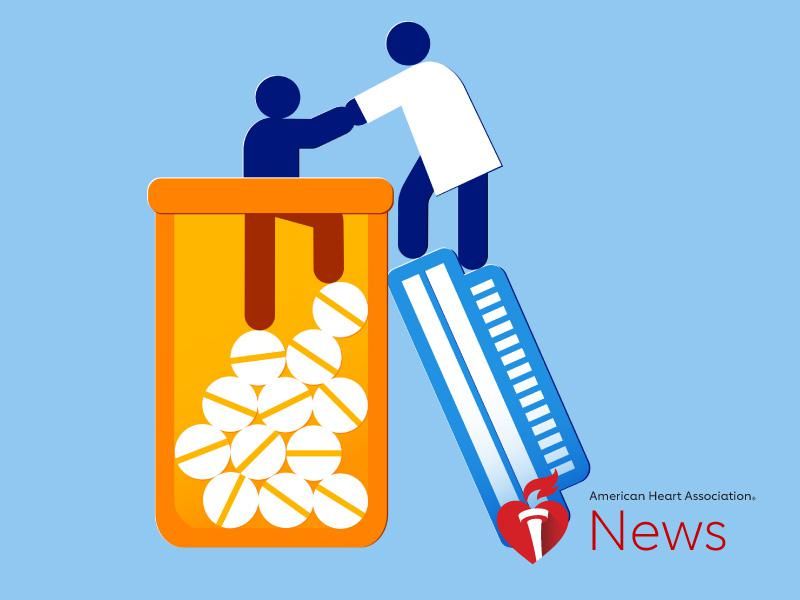 Federal guidelines geared toward curbing the overprescription of opioids have modestly reduced their use after medical procedures to implant pacemakers and other heart devices, new research shows.

But researchers say more needs to be done in the face of the nation's continuing opioid crisis.

"While we have seen some response, we still need to increase awareness and push harder on this," said the study's senior author Dr. David Frankel, an associate professor of medicine at the Perelman School of Medicine at the University of Pennsylvania in Philadelphia.

The study, published Monday in the American Heart Association journal Circulation, looked at opioid prescriptions for pain after procedures for pacemakers and implantable cardioverter defibrillators. The small battery-operated devices can correct abnormal heart rhythms. After the Centers for Disease Control and Prevention released guidelines in 2016, prescriptions fell a modest 2.5 percentage points, from a high of 18.9% in 2016 to 16.4% in 2020.

Opioid misuse -- due in part to overprescription -- resulted in 69,710 deaths in 2020, according to CDC data. In response to a substantial increase in opioid prescriptions and sales and a rise in opioid-related deaths, the CDC's guidelines recommend non-opioid therapy for pain other than that related to cancer, serious illnesses or people needing pain relief at the end of life. If prescribed, the guidelines recommend doing so at the lowest possible effective dosage and that people taking opioids be closely monitored.

Nonetheless, CDC statistics show drug overdose deaths in the U.S., including those related to opioids, continued to rise.

In a study published last year in Circulation, Frankel and his colleagues found that among the 11% of patients who filled opioid prescriptions within two weeks after heart device procedures, 1 in 8 went on to become a "persistent opioid user," which the researchers defined as filling a second prescription one to six months later.

Frankel said implanting devices to normalize irregular heartbeats is often done on an outpatient basis and shouldn't result in a lot of prolonged pain. For those who filled the initial prescription, "maybe they just had a lot of pain from the (procedure)," he said. "But there's really no reason to have pain more than a month later."

In the follow-up study exploring the 2016 CDC guidelines' impact, the percentage of patients filling opioid prescriptions after heart device implants rose steadily from 7.4% in 2004 to a high of 18.9% in 2016. After the guidelines were released that year, prescription rates began falling modestly, down to 16.4% by 2020.

However, the dosage prescribed did not drop significantly despite CDC recommendations to use the lowest possible dose. The authors noted the high dosages being prescribed placed patients at risk for persistent use.

"If your brain is wired in a certain way towards addiction, even a very small dose could set you on that road," Frankel said.

Pharmacist Sheryl Chow said that "while these results provide some cautious optimism that changing prescribing patterns are possible, the incidence of opioid-induced deaths continues to rise each year. So clearly there is a disconnect between changes in prescriber behavior and outcomes."

Chow, an associate professor of pharmacy practice and administration at Western University in Pomona, California, led the writing of a 2021 AHA presidential advisory about the impact of opioid use on heart and brain health. The report said some evidence suggests opioid use could interfere with medications used to treat people with cardiovascular disease and stroke, and there was an urgent need for more research.

Frankel said heart doctors may not realize the long-term impact of their prescriptions. In his initial study, he found that while it was a heart doctor who often wrote the first opioid prescription, it was rarely the same physician who authorized the refills.

"My hypothesis is that after they prescribe some oxycodone following the procedure, then the patient becomes addicted and seeks opioids any way they can," he said. "Maybe they complain of back pain to their primary care physician."

Part of the problem is the expectation in the U.S. that pain shouldn't be tolerated, Frankel said. So, patients should be told to expect some discomfort after a heart device procedure. "Pain is a natural part of the healing process, and it shouldn't be alarming," he said.

Other pain relievers, such as acetaminophen or aspirin, could be tried first, Chow said, noting the CDC is in the process of again revising its opioid use guidelines to encourage less addictive means for pain relief.

"There is much research needed in this area," she said. "We need to develop new and effective alternatives to pain management without addictive potential."