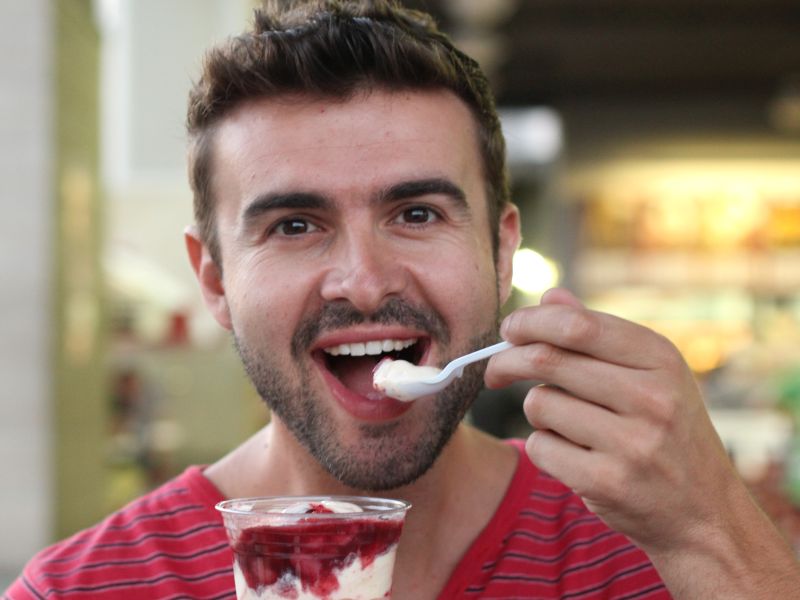 Yogurt is a healthy food, and it may also be a cancer fighter, a new study suggests.

Men who had two or more servings of yogurt a week had a 26% lower risk of developing precancerous growths in their colon, a new study reports. Researchers didn't find the same cancer-fighting benefit for women, however.

"These data suggest that other characteristics of yogurt, such as its potential role in altering the natural bacteria in our guts, may have cancer-preventive properties," said researcher Dr. Andrew Chan. He's a professor of medicine at Harvard Medical School in Boston.

But researchers cautioned that the study doesn't prove yogurt prevents colon cancer, only that there appears to be an association.

Specifically, the findings suggest that Lactobacillus bulgaricus and Streptococcus thermophilus, two bacteria usually found in yogurt, may reduce cancer-causing chemicals in the colon.

Researchers said yogurt may also reduce acid in the gut, creating a more hospitable environment for these beneficial bacteria. In addition, yogurt may fight inflammation, helping to reduce cancer risk, they said.

"These findings require further corroboration in other populations and additional work in understanding the mechanisms by which yogurt may affect gut health," Chan said.

Researchers said they did not receive any funding for the study from the yogurt industry.

All had an endoscopy between 1986 and 2012 to check for growths inside the lower bowel. Every four years, they also told researchers about their diet and how much yogurt they ate.

During the study, more than 5,800 men developed colon polyps, as did more than 8,100 women. The abnormal growths, also called adenomas, precede development of cancer.

Men who ate yogurt two or more times a week had a 26% lower risk for the kind of adenomas that are likely to become cancerous and for those in the colon rather than the rectum.

Their risk for noncancerous adenomas was 19% lower, researchers found.

Chan's team, however, didn't find any link between yogurt consumption and adenoma risk in women.

Dr. Arun Swaminath is director of inflammatory bowel disease at Lenox Hill Hospital in New York City. "It's not clear why this association didn't hold true for women," said Swaminath, who had no role in the study.

He said it's also unclear if yogurt with probiotics -- live bacteria and yeasts that help keep the gut healthy -- is superior to plain yogurt, "though the mechanism of benefit is thought to result from improvements to the microbiome."

In any case, tweaking your diet to include more yogurt is easy and may be beneficial, Swaminath said.

"If you're motivated, you can replace your red meat servings with yogurt to get a fantastic bounce for your gut health," he said.

The report was published online June 18 in the journal Gut.