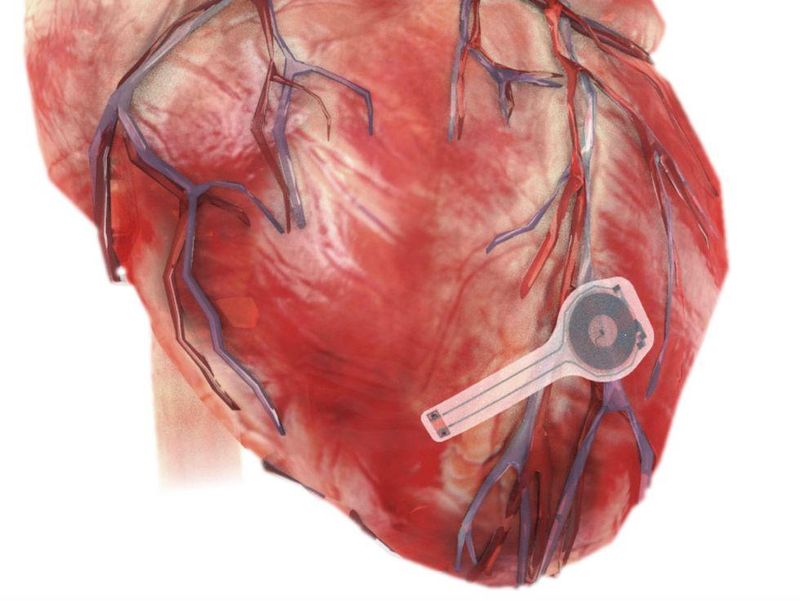 Coming Soon: An Implanted Pacemaker That Dissolves Away After Use

Researchers are reporting early success with a temporary heart pacemaker that simply dissolves when it's no longer needed.

So far the work has been limited to animals and human heart tissue studied in the lab. But experts said the early findings are "exciting" and could eventually change the care of patients who need a pacemaker for only days to weeks.

Pacemakers are devices that are implanted to help control certain abnormal heart rhythms, by sending electrical pulses to the heart muscle.

Traditional permanent pacemakers consist of a battery-powered pulse generator that is implanted under the skin of the chest and connected to the heart via wires called leads.

But sometimes patients need pacing for only a short time, such as after a heart procedure that leaves them with a slowed-down heartbeat. In that case, an external pulse generator is used, but patients still need to have electrodes sewn onto the heart, equipped with leads that exit the chest and connect to the generator.

While pacemakers work well, the leads carry a risk of becoming dislodged or causing infection, said John Rogers, a professor at Northwestern University, in Chicago, who led the development of the "dissolving" pacemaker.

The thin, flexible device has no wires or battery, and its materials biodegrade over the course of a few weeks.

So the technology could be well suited to patients needing a temporary pacemaker, Rogers said.

A heart rhythm specialist who was not involved in the research agreed.

"This is an exciting proof-of-concept study," said Dr. Rachel Lampert, a member of the American College of Cardiology's electrophysiology section and leadership council.

"We would love to have a temporary pacemaker that's resorbable," Lampert said, referring to the device's ability to dissolve into the body's fluids.

If that prospect sounds concerning, Rogers said the pacemaker's components include materials already used in sutures, as well as "minute amounts" of substances found in the body, like iron, magnesium and silicon.

The device, which weighs less than half a gram, has an encapsulating layer that contains electrodes; the bottom of each electrode is exposed and adheres to the heart's surface. It connects wirelessly to an external antenna, using the same technology that allow smartphones to make contactless payments, Rogers explained.

At this point, the pacemaker has been tested in several animal models, as described in the report published June 28 in the journal Nature Biotechnology.

Before it moves into human testing, Rogers said the researchers want to learn more about what happens to the biodegradable materials as they dissolve. Is it possible, for instance, for a tiny piece to lodge in a blood vessel?

The dissolving process, Rogers explained, "does not happen in a uniform way. It will generate small fragments. We need to see where these fragments go before they completely resorb."

Here is a video illustrating how the pacemaker dissolves:

As it stands, Rogers said the technology would translate to a specific scenario: Patients undergoing open-chest surgery who need temporary pacing during their hospital stay. The device has to be placed via open surgery, and it would be activated and controlled by a health care professional via the remote antenna.

Lampert noted that there is already a wireless permanent pacemaker that doctors can implant via catheter -- a thin tube that is threaded into a vein to reach the heart without open surgery.

If this temporary device could be implanted that way, Lampert said, that could open it up to more uses, such as when patients need temporary pacing after a heart attack or a catheter-based procedure.

Rogers said his team is working on that possibility.

The researchers also want to develop the biodegradable technology for other medical uses, he added. One example would be for patients who temporarily need a peripheral nerve stimulator -- an implant that can help relieve pain after surgery or an injury.

As for potential costs, the biodegradable approach could save money, according to Rogers, since it bypasses the need for surgical extraction.

The U.S. National Heart, Lung, and Blood Institute has more on pacemakers.