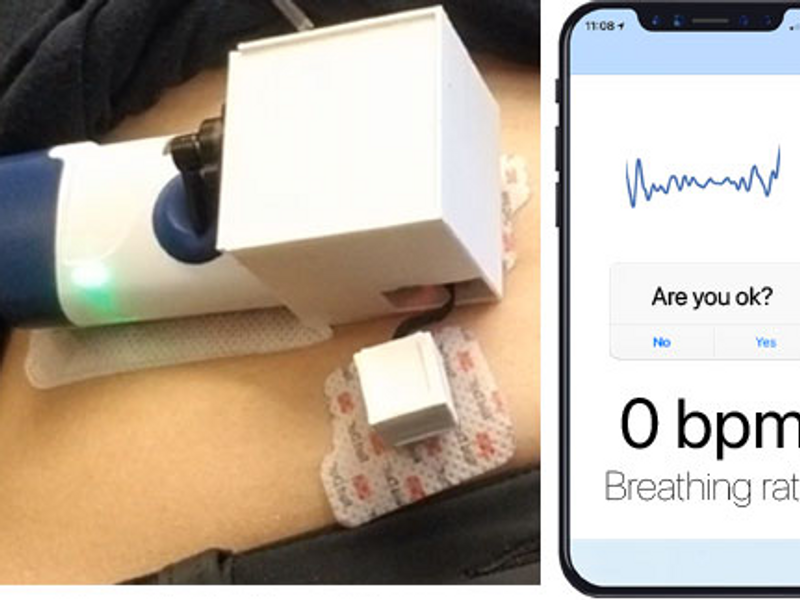 A wearable device that could inject a lifesaving antidote for an opioid overdose might be on the horizon.

A new study shows that the device, worn on the stomach like an insulin pump, can detect when someone stops breathing from an overdose and inject the drug naloxone to restore breathing.

"Fatal drug overdoses in the United States are at an all-time high, and opioid overdoses account for the majority of these deaths; however, up to 52% of fatal overdoses occur when the person is alone," said lead researcher Justin Chan. He's a doctoral student at the University of Washington's Paul G. Allen School of Computer Science and Engineering.

"Our sensing system can potentially reduce fatalities caused by opioid overdoses by administering naloxone in a timely fashion to subjects, even when they are alone," Chan said. "Our system can also potentially be used to alert EMS to people experiencing an overdose, who can then provide additional care for patients."

The device includes accelerometers that measure breathing and a processor that detects when breathing stops. The device can activate an injector when that occurs. It also transmits breathing rates to a smartphone by Bluetooth.

To test the device, Chan and his colleagues recruited 25 participants. The device accurately tracked respirations among people with opioid addiction. The device was also able to identify opioid-induced apnea, a breathing pattern that usually comes before a fatal overdose.

The initial test measured breathing to develop the algorithm and did not inject naloxone.

But in a second study, 20 participants simulated an overdose in a hospital setting by breathing normally, then holding their breath for 15 seconds. When the device detected no breathing movement for at least 15 seconds, it activated and injected naloxone.

Blood tests confirmed that the system delivered the naloxone, the researchers noted.

They want to make these devices widely available, but first they must be approved by the U.S. Food and Drug Administration. The FDA has released special guidance on these types of devices, Chan said.

"There is a critical need for systems that can reverse opioid overdose events, especially in the absence of bystanders, where many overdoses occur," he said. "Our wearable injector system is useful even in scenarios when overdose events are witnessed, as neither friends nor family may be aware that an overdose is occurring. In these scenarios, our injector system would still be able to recognize an overdose and deliver the antidote."

Dr. Robert Glatter, an emergency physician at Lenox Hill Hospital in New York City, said this device may have potential to offer those with opioid addiction who are at the highest risk of overdose the greatest chance to survive.

Glatter, who wasn't part of the study, added that the pandemic has increased despair among those addicted to opioids, and deaths due to drug overdoses have escalated.

"Also, a combination of untreated or inadequately treated substance use disorder along with ongoing and untreated depression and anxiety and the lack of access to mental health care and treatment programs continues to impair our ability to reduce ongoing [overdose] deaths," he said.

The reality is that although naloxone is available over the counter without a prescription, getting this lifesaving medication into homes continues to be a challenge, Glatter said.

"Timing of administration is essential, as opiates in escalating doses and overdose are deadly within minutes if ingested in high enough quantities. Opiates suppress respiratory drive, ultimately leading to death by hypoxia [low blood oxygen]," he said.

Although other medications can help those with opioid addiction, they are not a replacement for having naloxone ready to inject at the moment when someone overdoses, Glatter said.

"One harsh reality we continue to live with is the ongoing opioid crisis, fueled by the widespread availability of the cheap synthetic opioid fentanyl obtained online, but also by local dealers who cut heroin with it to elevate its potency," he said.

The report, which was funded by the National Science Foundation, was published online Nov. 22 in the journal Scientific Reports.

For more on opioid overdose, see the U.S. National Institute on Drug Abuse.